The Sad Story of a French Mother's Ghost 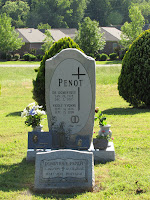 It is mother's day today and for me it is touched with sorrow.  For thirteen years our mother's days were split between my mother,grandmothers, and my husband's mother.  My husband's mother,  Nicole always spent the entire day with us.  I bought her many gifts because she was alone and her family was in France and she stayed just for us.    She was a sad woman.  She had a difficult life.  She had been raised by an old, French military family.  In those days,  France had been a colonial empire.  Nicole grew up in Vietnam.  It was a French colony that was called Indochine at the time.  When she was born,  her mother wept because she was so disappointed that she had a girl and Nicole was raised by her Vietnamese nannies and her father.  When she was old enough,  she cared for her younger brothers.

Later, her father was transferred to another French colony.   The family move to Algeria, where Nicole cared for her three younger siblings and worked to make others happy.  When she was finally free to pursue her own fate,  she clung to the bonds of her youth and moved back to France to work to put her brothers through school.  Nicole was a nanny for their children and a source of financing for their needs.  At one point,  she broke free from her family and pursued her own dreams.  She got a job and moved to Morroco, where something terrible happened to her.  None of us know what.  She wouldn't talk about it, but we knew that it had been horrible.  After that, she moved back to France and continued taking care of her family.

When she was 40 years old,  she met a man who was studying Philology (the study of languages) at Yale.  He was a brilliant, older Frenchman who spoke 7 language and  was working on his doctorate abroad.  They wrote love letters to each other across the ocean and a year later they married,  only having met each other a few times.  She had beed seduced by her husband's poetry and gift of languages.  He had won her heart, but she wasn't prepared for what was ahead of her.  She wasn't prepared for Alabama.

She was already pregnant when she moved to America.  She didn't know English and she immediately hated Alabama.  She had never learned to drive.  In France, it hadn't seemed necessary.  In Vietnam, Algeria, and Morroco,  it hadn't been necessary.  In Alabama, she was trapped and alone and the only joy she found was in her son, who she took back to France for months at a time at least once a year so that the little boy was raised as part of two countries,  one that his mother loathed and one that she pined for.

When my mother-in-law died,  her best friend told me that my mother-in-law's ghost had tormented her for days.  She had moved objects and left things in disarray.  When her friend went up to visit the grave,  the haunting stopped.  Similarly,  after Nicole's death,   I felt her presence with us for a long time.   There was nothing tangible.  My sons said they saw her in her old chair.   I thought I heard her voice in quiet moments and Xander, my youngest, would come down looking for her when he heard her calling.   After we paid for her tombstone and buried her ashes in the mountains with her husband, I thought her spirit left us.   I thought she had found peace, but over the last few weeks she seems to have come back.  I often see the dogs barking at the china cabinet.  They can bark forever.  When I am alone,  the garage door opens and closes on its own.  Strange noises echo throught the silent house.  We kept a portion of her ashes in a small urn that is in the china cabinet to carry to France next year and cast into the sea.   Perhaps she is waiting for that or maybe she just misses us. 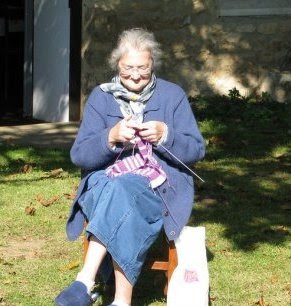 Sharon Day said…
What a complex life with so many human emotions--that is just the sort of person to haunt, someone who has known great extremes in emotion and whose heart was elsewhere. That pining seems to just leave a residual. If you're going to have a haunting, that is a good one to have, someone much loved.
May 9, 2010 at 6:31 PM

Pam Morris said…
what a lovely but sad story...I have a feeling she is anxious for her ashes to be returned to her homeland
May 11, 2010 at 7:46 PM

Julie Ferguson said…
She sure had a hard life, with some good thrown in. Perhaps she wanted her final resting place to be back in France and will be happy with you bring her ashes there. What a nice tribute...
May 12, 2010 at 10:30 AM

Unknown said…
I think of Nicole daily and mourn her passing. Even though I often didn't understand her literally or figurtively, I always loved her. May she truely, by the grace of God, rest in peace.
May 14, 2010 at 8:35 PM