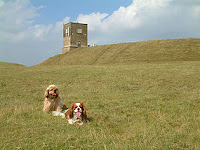 One of my neighbors told me a wonderful story last night.   She is from the UK and her family lives there now.  In the UK,  she says history is so common it is taken for granted.  The landscape is dotted with old castles, abbeys, roman ruins, and dolmen.  They are like trees there.  Her father lives in Wilshire and enjoys walking his dog every day.   The people in the town he lives in like to walk their dogs around Ringsbury. Ringsbury Camp is an Iron Age hill fort, thought to date from approximately the year 50BC. It is located in the civil parish of Purton in Wiltshire.  It was a Roman forte.

One night,  her father was walking his dog, as always, and he saw what he thought was a drunk man stumbling through the ruins.  He didn't think twice about the figure staggering towards him.   He ignored the man.  As the drunk got closer my friend's father noticed he was in tattered Roman garb.  This made him hesitated.  Asher father watched, the Roman man staggered another time and vanished into the morning mist.  He didn't believe in ghosts before,  but now he believes.
Email Post
Labels: Dog Walking Roman Ghosts

Sharon Day said…
Oh, that would be so wicked to see history repeat itself like that! Jeez!

Julie Ferguson said…
nice little creepy story and now there is one more believer
May 15, 2010 at 3:51 PM

Anonymous said…
love these stories! my mom has told me many true stories about different relatives' experiences with ghosts. i'm a firm believer.
May 16, 2010 at 2:42 PM