The Many Ghosts of Littlecote House 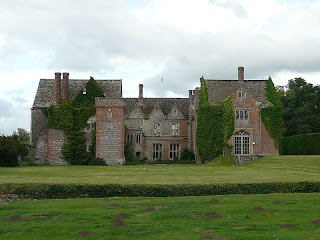 Littlecote House has played a central roll in many of the major events in English history.  Elizabeth I, Charles II, and Henry VIII have all stayed here.  The D-Day invasions were planed here.  Guy Fawkes was tried here.  It was in Littlecote's lovely halls that Henry VIII seduced the one wife he was said to truly love,  Jane Seymore.  Historical events gather around this beautiful mansion like mist and so do the ghosts.

The house was built in the thirteenth century, but the ghosts of Littlecote come from a later time.  In 1575,  Littlecote became the scene of a despicable crime.  The owner, William Darrell was a wild man.  According to legend,  one night a n nobleman sent for a midwife from another village, had her blindfolded and taken to the house where she was instructed to help deliver the baby of a woman.  As soon as the child was born the nobleman threw it in the fire.  The midwife was given a handsome sum to keep her mouth shut, but she reported the crime.  Littlecote was the main suspect in this case, but the midwife could never prove his guilt.  He was arrested and acquitted.  Fourteen years later,  Darrell was thrown from a horse and died.   Legend says that the ghost of the dead baby killed him.  This ghost is called the burning babe and has been seen all over Littlecote since this time.

Darrell has also been seen with his phantom hounds roaming the grounds of the old estate.  He is said to be a death omen,  appearing with a coach and horses when a death is eminent.  There are other ghosts at Littlecote.   There is a woman in a pink night dress that appears from the mist and another woman holding a baby who could be one of Darrell's many mistresses.  Littlecotte is now a hotel, so if you are looking for a ghostly vacation,  this might be the perfect stop.
Email Post
Labels: Hauntings Littlecote Ghosts UK

Unknown said…
What a beautiful place. I would LOVE to go visit this place!

Anonymous said…
as every tragic story, there's a women, there's a lover, and there's murder or suicide, that put end to the beauty love history, the only thing that is miss here is Viagra Online investigation, this people travel across the country investigating this cases.
April 19, 2011 at 8:56 AM

Anonymous said…
I was friendly with the currater of antiquity’s at Littlecotte House when it was in the ownership of Sir Seaton Wills during this period a German television company made a documentary about the story of the manor house .
Following a session shooting footage much to my friends surprise they congratulated him on providing a member of staff in English civil war period costume to stand in the background of a bay window , surprisingly their was no member of staff involved .
The camera captured a figure in the back ground of one of the shots and several black and white photograph were presented by the Television Company to my friend . In the photographs the image of this person can be clearly seen , Stranger than fiction I often wonder what happened to this German TV documentary
August 5, 2013 at 1:29 PM

Anonymous said…
Hi
I did stay at Littlecotte House in 1974 not the main house, the little cottage by the main entrance on left,never again
January 21, 2015 at 4:01 PM

Anonymous said…
I first became aware of Littlecote House from the ITV series Strange But True, presented by Michael Aspel in the mid 90s. One segment of an episode (not sure of the date, possible about 1995/6?) talked about Littlecote and the story of William Darrell murdering the new born baby in the fire. Aspel goes on to tell how Darrell fell off his horse whilst riding in the woods, which according to some accounts was caused by sunlight shining through the trees causing his horse to jump, but in the episode it tells of Darrell seeing a ghostly figure of the baby which caused his horse to fling Darrell off causing him to break his neck.

A website I came across mentioned a few things which the Strange But True ep never mentioned, one particular thing told was how the midwife was awoken one November night by a man dressed in dark clothing covering his face (presumably to conceal his identity) and offering the midwife to accompany him on horse back (which he would pay her handsomly) to unknown location where she was asked to be blind folded. The woman later recounted that it took them around 40 minutes to get to the place where the woman was giving birth. On arrival she was led up a flight of steps and into a redroom where she was unblind folded, and she was witness to a young girl laying on a bed with a mask over her face but in distress (I was surprised the mask account was never mentioned in the ep, and it's the first time I've of this). The midwife noted how odd it was that there was no blankets ready, bowl of water that you would've expected to see upon the birth of a child. Another curious story told of one of the Wills brothers seeing a woman dressed in pink walking along the gallery hallway one night (again none of the TV documentaries I've seen mention this ). Also, Peter De Savary's account of seeing (and speaking to) the lady in the "modern country clothes" (as he described her) seems to be slightly different according to which account you read. On the site I came across it mentioned that Peter De Savary's ghostly encounter happened shortly after he bought the house (according to the site it was 1993, which dosen't make sense as the De Savary's bought Littlecote House in 1985). From watching the Strange But True ep I had always assumed the ghost of the lady De Savary spoke to regarding her baby's clothing being auctioned was the mother of the child that is said to have been murdered by Will Darrell, but according to this particular website she was from the 19th century (I think most viewers would've thought the same). It also mentions a fashion photoshoot that took place in the hallway, where one of the photography assistants took a polaroid snap of the model at the fireplace to see how the shot would look. Upon viewing the polaroid they discovered the ghostly figure next to the fireplace. Why wasn't this mentioned in the Strange But True episode?. Anyone know where this photo can be found online as it's the first I've heard of it.
October 29, 2020 at 2:38 AM

Anonymous said…
I do wonder if the real story of the murder of the baby was a satanic ritual sacrifice, which some researchers into the alternative media arena claim has been going on for millennia and still goes on to this day amongst the rich and elite families. Maybe the story has been watered down throughout centuries to cover this up. I believe alot of historical events have been "falsified" so to speak, one such event being the gun power plot.
October 29, 2020 at 3:50 AM