The Ghosts That Walked in Beauty Like The Night 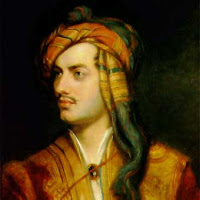 Lord Byron is one the most famous poets in the world. His dark poetry has seduced many, including me. George Gordon, the 6th Lord Byron after Napoleon, is possibly the most revered and reviled icon of the Romantic Age. The poet's personal beauty, brilliant mind, and reckless spirit fascinated his contemporaries. His dark poetry had many sources. It came from his own personal tragedies, his bipolar disorder, and his haunted history.  His poetry was greatly influenced by the infamous ghosts of  the haunted abbey that had belonged to his family for centuries and their dark beauty.

The Byron family home, Newstead Abbey, is one of the most famous haunted locations in the world. The Abbey is located in Nottinghamshire, England and is haunted by several ghosts. The priory was built around 1170 for the Order of St. Augustine and was bought in 1540 by Sir John Byron who turned the abbey into a mansion. Ever since the purchase of the Abbey, the Byron family was tormented by bad luck and poor fortune. By the time Lord Byron inherited the estate, it had fallen into terrible disrepair. His father had been known as the wicked lord and had let the house go to such a state that the only inhabitable portion of the house was the scullery. The wicked lord lived and died drunk in the scullery. In 1817, Lord Byron sold the house, but the ill fortune stayed with all the following owners of the notorious abbey.

The most famous ghost of Newstead Abbey is the black friar. Lord Byron claimed that the black friar came to him on his wedding night. The black friar was an omen of bad fortune and Byron’s marriage ended in less than a year. A white lady is also said to haunt the grounds. She is the ghost of Sophia Hyett, a young lady who fell in love Lord Byron. The love was unrequited and the young woman was said to have taken her own life for the sake of her beloved poet. 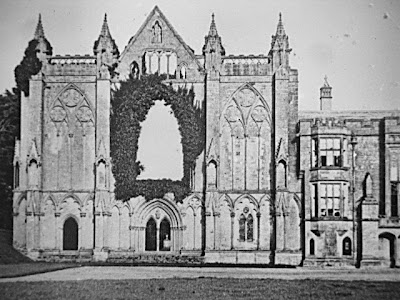 Pam Morris said…
I wish SO much I had been more aware of the histories of all these places when I lived in Europe! could just kick myself...still, thanks to you, am learning about them now! so fascinating!
May 11, 2010 at 7:41 PM

Julie Ferguson said…
Now that is a place to visit when in Europe, if I ever get there. The stories of the history and hauntings is very intriguing.
May 12, 2010 at 10:33 AM

Jessica Penot said…
I think you should go on the Haunted Scotland trip. You could stop by Newstead while your in the area lol.
May 12, 2010 at 9:53 PM