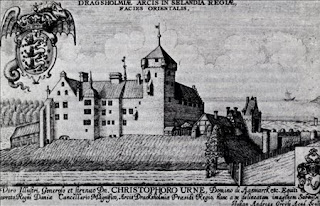 I love history.   The reason I first fell in love with ghost stories is because of the many layers of history that lurk behind each story.   In Europe,  the layers of history go deeper because the history is so much longer.   Dragsholm Castle is one of the most haunted places in Europe and it is filled with history and ghosts.  Dragsholm Castle was was constructed during the 12th century by Bishop of Roskilde. When the castle was finally completed it became home to royalty and nobles alike.  Dragsholm is one of the oldest secular buildings in Denmark and its history is long and dark.


In the 16th century,  the castle became the residence of the royal family.  During the period from 1536 to 1664, Dragsholm Castle was also used as a prison for noble prisoners. In the large tower at the northeast corner of the castle, prison cells were made.  Some of the most well-known prisoners at Dragsholm Castle include the last catholic Bishop in Roskilde, James Hepburn, 4th Earl of Bothwell, third husband of Mary, Queen of Scots, and the mad squire, Ejler Brockenhuus.   The Earl of Bothwell was subjected to particularly horrible treatment in the tower and was tied to a pillar and left to rot.  He was given just what was necessary to keep him alive and he was said to have gone mad.

The Earl of Bothwell is one of the most famous ghosts of Dragsholm.   The Earl has been seen riding into the courtyard of the castle with his horse and carriage.   Many visitors claim to have heard the horses hoof beats upon the cobbled yard.


The castle is also said to be haunted by two other ghosts. There is a white lady who is said to be a daughter of one of the bovles who owned the castle.   She fell in love with a commoner and when her father found out he was so angry that he imprisoned her in the dreaded tower. She was more than imprisoned, legend says that he walled her up in her prison cell and left her to die.   It is said that every night she returns to the castle and walks around the corridors.  There have been numerous sightings of her.  There is also factual evidence to support this story.  In the 1930's, when the old walls of the castle were torn down, workers found a hole in the wall and a skeleton with a white dress in it.

The last ghost to haunt Dragsholm Castle is a gray lady.  She is the rarest of the three ghost and is seldom seen or heard. She is believed to be the ghost of a young serving girl who died of a tooth ache.   She lingers in the shadows, hiding from sight, looking for a light in the darkness.

If you would like to visit Dragsholm Castle,  you are very much in luck.  During 1937, the castle came into the ownership of the Bottger family who have since converted it into a hotel.   Their website explains their many services and tells about the castle, its history, and the wonderful food that can be eaten where others once died.  You can plan your visit by going to  http://www.dragsholm-slot.dk/en  . 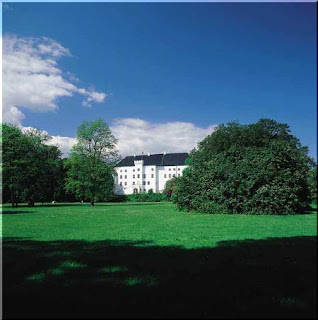 Sharon Day said…
That's one I hadn't heard of. Oh, those poor ladies in white--they always have tragic love stories behind them. Apparently, women don't get over their great loves, even in the afterlife...
May 2, 2010 at 6:11 PM

Pam Morris said…
makes me want to go live in Europe again...I was pretty relentless about visiting castles during my time there but never focused on the ghost/haunting aspect of things. ah well, I'll just listen to your stories!
May 3, 2010 at 6:17 AM

Jessica Penot said…
I wish I could go back too. We stayed in the Loire Valley and the castles there were amazing. I wasn't focused on hauntings then either, but I hit a few haunted castles by chance!
May 3, 2010 at 9:38 AM

Sharon Day said…
You’re mentioned on my blog today http://autumnforestghosthunter.blogspot.com
May 3, 2010 at 10:04 AM

Julie Ferguson said…
What an interesting place. I would love to visit there and other castles in Europe. BTW, I love your new template...thumbs up!
May 3, 2010 at 10:41 AM