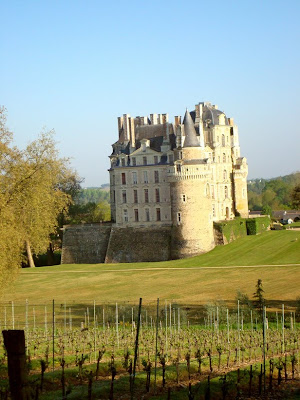 I have always been in love with France and its turbulent history.  My husband is French and my grandmother claims to have a copy of our family tree going back to the 12th century.  She says she can trace our ancestry back to Henry de Navarre. Brissac Castle, located in the stunning Loire Valley,  was once owned by Henry de Navarre.  It was once owned by many people and, like many castles, has a history that is full of war and strife.

Brissac Castle was built as a fortified castle by the Counts of Anjou in the 11th century.  During the French wars of religion,  the castle was given over to Henry de Navarre in 1589.  It was badly damaged during the civil war that followed between the protestants and the catholics.  The catholics were lead by the infamous Catherine de Medici and her sons and the Protestants were lead by Henry de Navarre.  The damage to the castle was so severe that for a time, it was scheduled for demoliton, but was purchased and renovated by the Duke of Brissac only to fall into disrepair again during the French Revolution.  Again it was saved in 1844 by the Duke of Brissac's family.  Brissac is the tallest castle in France.  It is seven stories high and it towers over the French Countryside reminding  with its gothic towers and shadowed windows.

The ghosts of this castle are not ghosts of war.    They are the ghosts of a thwarted husband and his unfaithful wife.   For a period,  the castle was owned by a noble named Jacque.   Jacque was a successful man with a beautiful and faithless wife.  His wife, Charlotte,  took a lover and was completely indiscrete in her affair.   The legend says that she would make love to her young man in the room next to her husband, keeping him awake with her moaning.   Jacque couldn't take the abuse and it wasn't long before his wife and her lover vanished.  But the two murdered lovers had their revenge,  their moaning continued, even after their death.  It filled the castle, driving Jacque mad and making him flee his own home.  Visitors to Brissac say that the two lovers still fill the night with the sounds of their passion and their ghosts forever linger in the shadows of Brissac Castle.
Email Post
Labels: Brissac Castle French Ghosts Haunting

Sharon Day said…
I readily admit that the castle looks more like a romantic haunting site than a war one, if looks alone could evalute it. I like the romantic ones the most, probably because I grew up in the war one.
May 3, 2010 at 1:18 PM

Jessica Penot said…
I definately get a romantic feeling from this castle. I think that is France, however. War, plague, revolution and terrible things happen there, but some how or another it is the romance of the place that remains.
May 3, 2010 at 6:35 PM

dianne said…
I'm sorry Jessica it is such a long time since I have visited you ... this is such a beautiful castle and yes just by looking at it you get a feeling of romance...such a shame that it is still not in the name of your ancestor Henry de Navarre.
What stories those walls could tell! ♡
May 4, 2010 at 6:17 AM

Courtney Mroch said…
I really want to Haunt Jaunt there some day. Anywhere in France really, but especially to the Loire Valley. How stunning. Another great French Haunt Jaunt. My faves of your shares!
May 7, 2010 at 9:00 PM

Anonymous said…
France history is fascinating, the country is fill with amazing castles, amazing towns, it is also my favorite country i Europe, plus their language is so cool.

viagra how it works said…
Great post. I think one of the basic things that we should know know is that we must always make sure that you are safe in every transactions you wanted to indulge with.
October 30, 2011 at 12:18 AM

JHB said…
I would like to know where you found this "so called" legend about Charlotte de Brissac because most of what you posted isn't accurate. The documented history is that her husband killed her and her lover. They did not disappear. Her husband, Jacques, did not go mad and sell the castle because he heard the ghosts passionate moans. Jacques handed his lands over to the King to satisfy the huge fine imposed on him for killing his wife, King Louis XI's half sister. And there is no mention of Charlotte shacking up with her lover in a room next to her husband's to routinely taunt him with her passion. That's ludicrous! This is the 15th century we're talking about. She was literally taking her life in her hands cheating on him. She was murdered for it. And, it was a servant that told her husband about her adultery, not her conduct of being openly indiscreet in a bedroom next to his, and routinely done to the point where her husband couldn't take it any more. The bedroom where her infidelity took place was a floor apart from her husbands. Charlotte's room was upstairs and her husband's was downstairs. If you want the real story check out this link: http://www.departures.com/travel/rediscovering-france/staying-grand-loire-valley-château
February 1, 2015 at 1:24 AM

Jessica Penot said…
I found it in an old collection of French Ghost Stories. The collection is from the 1950s. Thanks for correcting the history!
February 2, 2015 at 5:49 PM