The Paranormal Doctor and His Ghostly Cures 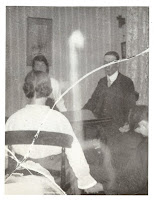 For the better part of history,   mental illness was believed to be caused by the paranormal.  Of course,  no one in history would have said it this way.  They would have called it demon possession or spirit possession, but ancient cultures usually attributed the symptoms of psychosis to the supernatural world.  They turned to treatments like trepanning and exorcism to cure  the infected soul.

Beginning with such revolutionary minds as Galen,  this notion began to fade.   A medical model replaced the spiritual model and the medical model has prevailed for  thousands of years in Western society.  None of this seemed to  matter to Dr. Titus Bull.   Dr. Bull practiced medicine in New York in the 20's and 30's and he believed that modern medicine was too short sighted in its approach to mental illness.  He believed that  bipolar disorder, shizophrenia, and alcoholism were all caused by possessing spirits that entered their victims through the base of the brain.   He didn't think these spirits were necessarily evil or demonic.  He just thought they were very confused and lost.   He believed these spirits were the ghosts of the dead that needed help passing over to the other side.  He treated mental illness by helping the possessing spirits cross over.  He even published a book on the topic to help other physicians use similar techniques. In his book, he cites case studies and success stories.  He presents arguements that his ghostly cures are the effective cures.

Dr. Bull practiced during and after the spiritualism explosion of the early 20th century.  Although he was rare as a doctor, taken in context of the times his beliefs make sense.   He is fascinating, however, and sometimes, when I am working with a patient who has been in and out of psychiatric hospitals dozens of times and is completely resistent to all modern medicine,  I have to wonder if maybe he Dr. Bull wasn't on to something.
Email Post
Labels: Ghost Doctor Spiritualism Titus Bull

Kelly said…
Dr. Bull sounds like he was pretty brave to me to go against conventional medical attitudes of the day. I'm sure he had more than his fair share of peers insult or argue endlessly with him. For all of this, I applaud his tenacity and creative thinking. This is my first time here. Great writing. I came from The Wolf's site.
April 17, 2010 at 9:16 PM

Sharon Day said…
It's like "The Exorcism of Emily Rose" or "Sixth Sense." Being in the ghost hunting field, I've run into a lot of people who see ghosts and who believe they communicate regularly with the dead. There are so many mental conditions that can mimic this, that it's hard to tell what is what. I do think some people are more susceptible to information that the rest of us don't receive. Being psychic, I know that for certain, but whether people can have it to the extent of say the character on "Ghost Whisperer" I tend to be skeptical. Until they produce information they shouldn't know, I guess it will be considered mental illness and medicated away.
April 17, 2010 at 10:06 PM

Jessica Penot said…
Kelly, Thanks. I love the wolf's site.

Autumnforest, I don't know whether people can have it to the extent of the "ghost whisperer" either, but, like you, I think there are some things modern medicine can't explain.
April 18, 2010 at 6:34 AM