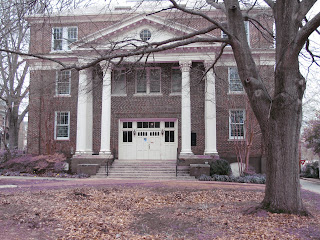 McCandless Hall is part of Athens State University. The building is a Greek revivial style auditorium. MCandless today is used to house the theater department and his been used for many contemporary plays and musicals. In the early 1900’s it was used to show case the talent of the famous opera singer Abigal Burns. While Ms. Burn’s was staying in Athens, she met a local attorney and the two fell in love, almost at first sight. In between performances, the two lovers would meet in the shadows of McCandless hall. Their love blossomed and on the night of her final performance Ms. Burns sung Verdi’s opera La Traviata with such emotion those that watched wept for the beauty of it.


That night Ms. Burns had to leave. Her art called her elsewhere and she could not linger any longer in Athens. She met her lover one last time and made him a solemn promise. “I will return,” she promised. She kissed him and vanished into the night. That night a terrible storm came to North Alabama, as they often do. Ms. Burn’s carriage was capsized and the lovely Abigal Burns met her death in the mud and rain.

Ms. Burns kept her promise, however. Her ghost returned to McCandless Hall and went to the room where she and her lover met and exchanged their vows. According to legend, she still waits in the shadows. She looks down from the window, waiting for her lover to return to her. Many have seen her face looking out, filled with longing and desire. Others have heard her footsteps and heard her weeping in the dark. When Ms. Burn’s died, a beech tree was planted in her honor in front of McCandless Hall. The tree still stands there today.

It is possible that Ms. Burns story is only a legend. Research shows no record of her presence at McCandless Hall and there is no firm evidence to support any of her romantic story, however, those who have seen her ghost and heard her weeping say there is no need for paper documentation. They know what they have seen and they know that her ghost still roams the halls of McCandless hall.
Email Post

Christina Colwell said…
Love the photo and your description of it. It is interesting how houses seem to absorb and react to the energies in and around them.
April 14, 2010 at 8:29 AM