The White Witch of Rose Hall 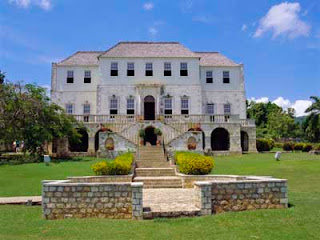 I love to travel.  Every journey is an adventure and I plan my trips carefully so that I can see as many new things as possible.  As I begin plans for our summer trip,  I have also begun looking at ghost stories and folklore from all the areas I'm considering visiting.  Jamaica is high on my list and was made even higher by the wonderous story of the white witch of Rose Hall.

No one knows how much of Annie Palmer's story is true and how much is legend.  There are some things that are certain.  It is certain that she resided in Rose hall and that she had four husbands that died under questionable circumstances.  The rest of the legend could be true, but even if it isn't many claim that Rose Hall is tormented by the ghosts of those who died there.

Annie Palmer was born in Paris, France.  When she was ten years old, she moved to Haiti with her parents.  Shortly after the move,  Annie's parents died of yellow fever.   She was adopted by her Haitian nanny who was a notorious voodoo queen.  Annie's adopted mother took great care with Annie's education and before Annie wed her first husband, she had already become known as a voodoo queen herself.  In 1820,  Annie married John Palmer the owner of the enormous and prosperous plantation east of Montego Bay known as Rose Hall.  Shortly aftter the wedding, John died.  Legend says that she poisoned her first husband.   Annie married three more times.  And she killed each husband differently.  She stabbed one, strangled another, and pourer boiling oil into the ear oft he last.

Her murderous hunger and desire didn't end with the  men she married.  Annie was a lusty woman and it was rumored that she took numerous slave men into her bed and when she tired of them she killed them and moved onto the next man.  Annie continued this way until one of her lovers stabbed her in the heat of passion ending her reign of terror.

Rose hall itself is an impressive house.  It is a Georgian Mansion with a stone base and a plastered upper storey, high on the hillside, with a fantastic panorama over the coast. Built in the 1770s, Rose Hall was restored in the 1960s to its former splendour, with mahogany floors, interior windows and doorways, panelling and wooden ceilings. It is decorated with silk wallpaper printed with palms and birds, ornamented with chandeliers and furnished with mostly European antiques.

Many seances and ghost hunts have taken place at the mansion.  Psychics and haunt jaunters and all manner of people have attempted to contact the spirits of the hall and discover the truth behind the legend, but none of these activities have provided enough evidence to confirm the legends.   Despite this, the ghost stories about Rose hall continue to grow and thrive and many travellers describe seeing Annie wandering Rose Hall's darkened halls.  They see her lovers and her husbands in the shadows of the cemetery and in the soft light of Annie's bedchamber and as long as the ghosts wander Rose Hall,  the legend will continue to thrive.
Email Post
Labels: Jamaica Rose Hall White Witch

Sharon Day said…
I love that story. It's such a legend! I think Ghost Hunters International went there. It seemed like it would have a great feel to it. If you go, you must report back!
March 15, 2010 at 10:12 PM