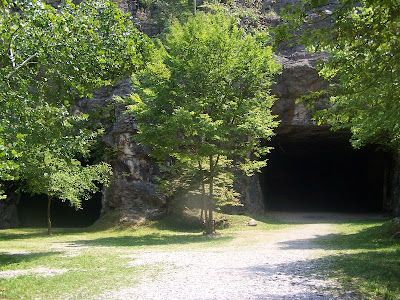 I have been trying all week to find any shred of evidence that Three Caves is haunted.  They should be haunted.   Three Caves is located in Huntsville, Alabama at the base of Monte Sano Mountain.  It is, as the name would imply,  three very large caves in the woods.   The caves are man made and were used as a limestone quarry until 1955.  When the quarry closed the land was donated to the Huntsville Land Trust.
Since that time these very accessible caves have become a local haunt for wierdos, wiccans, and spelunkers.  The caves are quite large and go back over a mile into the ground and have ceinlings of up to 40 ft.  Three films have been shot in these caverns.

In the seventies and eighties, the caves were also quite popular amongst wiccans and satanists and were the site of many dark rituals and summonings.  They have also been the site of at least five suicides and many accidental deaths.  Inexperienced spelunkers often crawl into the caves and find that they didn't know what they were up against.  Despite all this, the caves are still used by many nature lovers and urban adventureres.

I have dug and looked and researched and found nothing to indicate that these caves, filled with darkness, satan, ghost summoning rituals, and death, have even a whisper of a ghost.  So this brings me to the question,  if death, darkness, and black magic can't summon a haunting what is it that causes hauntings.  It can't just be the presence of tragedy and horror alone.  There has to be other qualities in the location that create a more suitable location for a haunting.  I have heard many theories about geomagnetic and solar activity and hauntings, but I tend to veer away from these thinking that the supernatural would have its own laws that would not be governed by the rules of our world.

My favorite book is Shirley Jackson's "The Haunting of Hillhouse".  It is the best haunting book ever written and if you have seen the terrible movie made several years ago based on this book, please try to forget the movie.  The book is singular in its subtle and completely psychological description of a haunting.  In this book,  Shirley Jackson says that some places are just "born bad".  She says that the very soil is evil.  I wonder if there isn't a seed of truth in this.  Horrible things happen every day without leaving a whisper of a haunting behind them, but a peaceful death can leave a violent haunting.  Perhaps some places draw these ghosts and hold them.  Apparently three caves isn't one of these places, because no matter how many people call forth the demons of hell in the mouth of these caves, the spirits seem to avoid it like the plague.
Email Post
Labels: black magic Hauntings three caves

Sharon Day said…
Wow, it's kind of kismet the way things happen. I've spent the past 3 hours working on scenes from my erotic horror novella "The Thicket" which is about pagans and the magical stones of a mountain and its caves. I have my own interpretation on it, but it's based on some things we have seen in the ghost hunting world, especially that limestone is an extremely active stone. Poltergeist activity especially is associated in buildings made of it and land filled with it. In my novella, the granite of the mountain contains the powers within the mountain, the quartz acts like a battery that gives energy, and the limestone absorbs the rituals and their intentions. I'm not really a believer that rituals and spells work, but that the emotions behind them, like those in a church when people pray or when a person goes into a drunken rage in a home, can be absorbed. So, it bad things have occurred in a cave made of limestone my guess is, can it get any more haunted than that? Yeah, I'd say bigtime! Awesomely haunted. If you call haunted--strange phenomenon. Definitely positively worth investigating. I know of few limestone places that don't have some weird things happening in them.
March 1, 2010 at 7:59 PM

Courtney Mroch said…
NEAT! Maybe I cold come down there and Haunt Jaunt to these caves with you sometime this spring? Looks awesome!

Also, I agree. Haunting of Hill House the book ROCKS! One of the best ever. Movies based on it didn't do too much for me. (Although the first one was pretty decent. Still it wasn't the book!)

AND...there is a place in St. Augustine I think MUST be haunted kind of like how you feel about these caves, but never have found anything on it. (Lightner Museum. It is my favorite place down there to visit. The ballroom is magnificent. it's loaded with museum pieces now, but you can just picture people still dancing there in their late 1800/early 1900s clothing...You might just have inspired me to dig up pics and write about it. Even though it's technically not a Haunt Jaunt...)
March 5, 2010 at 1:09 PM

Anonymous said…
I live approximately a quarter mile from the caves. When I was a teenager I use to spend a lot of time there hanging out with friends and exploring. They are intensely spooky. I've felt intensely surreal feelings there just upon entering the cave. Its overwhelming. There are a few local stories of ghosts and strange events there. A friend of mine claims that he and another friend were in the caves one night. They had a flashlight and a few things. According to my friend they saw what appeared to be glowing eyes in the back of one of the cutouts above the pond (it has water permamentaly inside of it) They pointed there flashlights there expecting to see a coyote and as his story goes they pointed the flashlight up and without any further discussion ran as fast as they could out of the caves. They ran all the way back to there cars screaming. He said they both looked at each other and said they had both seen the same thing: an old woman covered in rags intensely frail and dead looking. They both refuse to go back to the caves to this day. I rarely go there now because they freak me out too much.

Also there is a sink hole a few hundred feet to the right of the entrance. Above the cave are a lot of trails that the landtrust owns. The sink hole, until recently, was completely open. Apparently several hikers died there in the past by falling from the sinkhole into the cave. This area is covered in debris and is hard to see and it is rumored that a few of the people laid there for days before they died of starvation.

Also my dad has told me about how back in the 70s some guy took his girlfriend to the entrance and tied her up and burned her to death.

Also a friend of mine's great aunt killed herself by shooting herself in the face on the top of the cliff. She then fell into a crack between two rocks near the entrance and it took weeks before hikers discovered her body.

The reason you can't find any evidence of three caves being haunted is because it is right next to a bigger haunted area: dead children's play ground.

This is a small playground that is dug into the side of a giant limestone foothill of Monte Sano. There was a suicide there and several reports of ghosts even something called the goatman of alabama (not sure what that is). People go there all the time and it has a lot more publicity that overshadows three caves. Also three caves is harder to find and harder to get into. Any person unfamiliar with huntsville could find dead children's playground using google.

I hope that helps a lot. The place is awesome. If you ever find yourself in huntsville you should go there just to experience how surreal the amount of energy there is once you enter it.
November 2, 2010 at 7:07 PM

Anonymous said…
I went very recently on a sunny day.. and when I went the trees weren't there.. but fog surrounded one of the openings in the cave.. and it moved between the caves as if it were watching my friend and I.. then we both saw a shadow in the fog.. the fog followed us up the hill and then vanished... it was weird..
January 11, 2013 at 4:26 PM