Long Nights at the Morgue 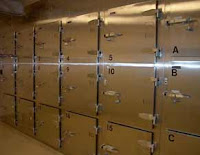 My husband and I used to spend the night at the morgue.  It wasn't a morbid fascination.  It was an easy part time job.   The job didn't require much.   You just had to be there.   If a body came in when the day staff was gone,  you had to check it in and move it to the freezer.   Many nights, nothing at all happened.   There was a room just for night staff with a little bed and a television with a VCR.  You could lay on the bed, watch TV, and sleep.  The only thing is,  you were alone in the morgue.

My husband has many interesting stories about his nights in the morgue.  He worked there very regularly.  As a med student,  it was only part-time job he had the time to work. He also wanted to be a pathologist for a while.   He spent inumerable night sitting on that crappy little bed with stained sheets in that closet of a room looking out at the door to the freezer.  The nights were long there.  You would try to sleep, but no sleep would come.   It didn't help that every night around midnight,  the fire alarm outside of the freezer where the bodies were kept went off for about five minutes and then suddenly stopped.   It also didn't help that your imagination could absolutely run wild in the confines of that tiny room.

My husband described his worse night at the morgue to me.  It was the night after on of the many hurricanes we got at regular intervals in Mobile.   A body had been found in a flooded out road after the water receeded.  The body was bloated and half rotted and he had to check it in. It smell terrible and he felt sick.   He almost past out.  Several bodies came in that night and the alarm went off one time for each body.
Email Post
Labels: jessica penot morgue

Courtney Mroch said…
There's no way I could spend a night in a working morgue. An abandoned one where there were no bodies coming in sure. Easy. But All I could think reading this was, "Not once did she mention among the things running wild in her imagination would be the possibility of the start of a zombie apocalypse the night she was in the morgue." That's all I would think about!
April 8, 2010 at 9:42 AM