The White Queen of Chenanceau 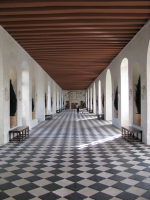 During my castle tour of the Loire Valley, I listened to many audio tours and studied the history of each castle. There was no mention of anything supernatural. They contained only the facts. Interestingly, my son's audio tour of the castle of Chenanceau was quite different from mine. It was designed for young children and told a detailed account of the ghost that haunts the castle.


Chenanceau is one of more stunning of the castles in the Loire Valley. It is a beautiful Renaissance castle that stretches across the Loire-Indes River. It was constructed in phases and is a uniquely feminine castle. All of it's owners and occupants have been women and the castle itself seems to whisper this character. The castle was taken by King Henry II in 1517 for his mistress Diane de Portier. After the king's death, his wife Catherine de Medici, took the castle back from Diane and began the elaborate construction of the gallery that stretches across the river. It was completed in 1577.

According to my son's audio tour, her ghost still wanders the halls of the chateau forever mourning her lost love. She is seen by many visitors as a white clad specter weeping in the hall. Many have also reported seeing images of her in pictures taken of the hall. I have included the pictures we took of the gallery. It may be my imagination, but I always think I see a soft white form by the
Email Post

Courtney Mroch said…
ACK! So, so, so envious you have been there. Really been there! And what a great story. What GORGEOUS pics! (I can only assume it was even more gorgeous in person???) Love your French posts best of all! ;)
February 28, 2010 at 8:06 PM