The Tragic Ghost of Garbrielle Bonnet 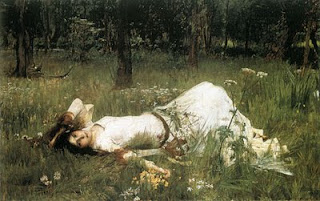 Mobile, Alabama is on of my favorite places.   It has a long history that mixes cultures and blends stories ina  a way that is entirely new.   We travel to Mardi Gras in Mobile every year and I was sure to pick up a few ghost stories along the way.  This was one of my favorites.  It plays to my romantic side and brings to mind Waterhouse portraits of Ophelia.

Mobile was celebrating the third Mobile Mardi Gras in 1703. The lovely Gabrielle Bonnet came to Mobile aboard the ship called Pelican in 1702. Breathtakingly beautiful, Gabrielle had been one of about two dozen young girls recruited by the French government to marry and mother the future of colonial France. These girls came to be known as the pelican girls.

Gabrielle was very lovely and was very popular among the colonial French Canadians who were stationed there. However, one man, who's name has been lost, won her heart and soon married her. Gabrielle fell deeply in love during the required month long courtship. Sadly, the day after her honeymoon night, her new husband rode off from the fort and deserted his young, beautiful wife. For a few months, Gabrielle wandered around Old Mobile with her black hair unbound, still wearing her white wedding dress.

The sympathetic Mobilians tried to look after the grieving girl, but she would not be consoled and her behavior became more and more erratic. She often cried out his name and wandered around the woods screaming in heartbroken anguish. Having no money, and no family back in Paris, Gabrielle was hopelessly destitute. During the Mardi Gras celebration of 1703, Gabrielle ran into the woods surrounding the fort in her white gown with long wavy black hair flowing behind her. She was never heard of again, while she was alive. The following Mardi Gras some of the superstitious Indians of the fort reported hearing Gabrielle crying out in the woods around them. Since these first reports, many people have reported seeing the sad Gabrielle wandering around during Mardi Gras looking for her lost lover. Stay out of the woods during Mardi Gras. You may see the ghost of Gabrielle Bonnet!
Email Post

dianne said…
That is a very sad story, how cruel of her husband to leave her like that, she must have been devastated as well as heartbroken ... The Pelican girls were very brave I think, to come to an unknown country and begin a new life. I think it is a sad thing in some ways as women had few choices if they were poor, it is still the same for women in many countries. I was pleased to read that many of the girls and women did make suitable matches and were able to go on to make a better life.
I love the image you have chosen for your narrative, it is most appropriate.
Thank you for joining my blog as a follower Jessica, I hope some of my other posts will interest you. ♡
February 23, 2010 at 11:08 PM

Jessica Penot said…
Diane. You have a lovely blog. I even love your quote at the start about learning to dance in the rain. I'm a counselor and I wish I could teach that to everyone I worked with. I'll watch your blog with interest.
February 24, 2010 at 7:48 AM

Gagrl said…
Well, unfortunately, truth is a bit more tame than the ghost story. (My source is Old Mobile: Fort Louis de la Mobile by Jay Higginsotham.) Apparently Gabrielle was a bit "off" at the time of her marriage as one of the 23 Pelican Girls -- there was a bonafide mental illness in play, probably schizophrenia. Her husband did desert her -- he was a Canadian coureur de bois (fur trapper/trader) and was accustomed to living off the land, so he just left when her problems became too much to handle. She was known to live in the woods outside the original Mobile settlement for weeks at a time, but the settlement was at Twenty-Seven Mile Bluff, far north of the current city, so haunting the modern Mardi Gras meant she'd have to hike a ways...
July 6, 2010 at 12:23 PM