The Snake Goddess of Belle Isle 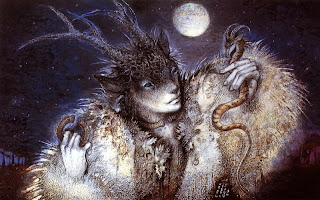 My family is from Detroit and I spent much of my time there as a child.  My family remembers back to the days when Detroit was a flourishing city.   My grandmother tells the same stories over and over again and  her favorite stories involve taking the street car to the theater.  There was nothing more wonderful in her mind than travelling through the streets of Detroit in search of adventure.  Time has faded my grandmother's mind and her lust for adventure and it has certainly been equally as cruel to Detroit, which is now a ghost town.  Even my childhood memories of this city seem brilliant in comparison to what it's become.

It is appropriate that Detroit has now become filled with ghost stories and legends.  My favorite Detroit ghost story is from Belle Isle.  Ottawa Indian lore tells of the beautiful daughter of chief Sleeping Bear. Her beauty was so stunning that the Chief kept her hidden from the eyes of young suitors by hiding her in a covered boat on the Detroit River. One day when bringing her some food, the winds, awed by her beauty, blew the covers off of the boat and it floated down the river. as it floated past the lodge of the keeper of the water gates, he also was stunned by her beauty and retrieved to boat and brought the young beauty into his tent, this enraged the winds who fell upon him, and buffeted him wildly about until he finally died from the beating. The winds, sorry for uncovering her beauty, returned her back to her father, Chief Sleeping Bear and begged the chief not to hide her from them again, but to let them enjoy her beauty. To protect her the chief, fearful that other men would follow, placed the princess on an island in the Detroit River and sought the aid of the Great Spirits to protect his beloved daughter by surrounding the island with snakes to protect her from intruders.


There she could run free with the winds around her, The spirits immortalized her by transforming her into a white doe and letting her live out eternity on the island. When the first white men appeared in the area they originally named the island Hog Island. but once they became familiar with the island, they renamed it Rattlesnake Island. It was not much later that it became known as Belle Isle. To this day, the maiden's spirit can be seen from time to time dancing in the wind on the island and most unsuspecting picnickers don't realize that the lovely girl in Native costume is not a modern miss dressed for a pageant, but is in reality the Goddess of Belle Isle. also know as the Snake Goddess of Belle Isle.

People who have seen this ghost say that she if you park on the island by the woods and wait in your car the Snake Goddess will come and call too you. She will signal to you to follow her into her kingdom
Email Post
Labels: Belle Isle Detroit

magikalseasons said…
You know I've lived in Michigan all my life and haven't heard this haunting tale. Thanks for posting this. We really do have some wonderful haunts here. :)
February 26, 2010 at 7:10 AM

Jessica Penot said…
Michigan is my favorite haunted state. We have an old family house there that is very haunted and I've seen more ghosts in Michigan than anyplace else. Detroit alone is one giant ghost story.
February 26, 2010 at 12:51 PM

Courtney Mroch said…
COOL story! Who knew? I just associate Detroit with cars, but there's way more to it than that, eh? THANKS for the education!
February 28, 2010 at 7:48 PM