According to many, The University of North Alabama is one of the most haunted universities in the country.  The ghosts here seem as common as the trees and many of the buildings have haunted histories.  UNA is Alabama's oldest four University and was founded in 1830.  It's history stretches into the dark parts of the civil war and back to desegregation.  It has seen all of Alabama's history and stood the test of time, but not without it's ghosts.

Among the many haunted locations on this campus, is Guillot University Center.  Long ago this old  building was a girl's dormitory.  Apparently,  a young woman who lived there wasn't very happy because she hung herself from an elevator shaft.  Since that time, the building has changed function but students report seeing her ghost wandering the halls.  Norton Auditorium is also said to be haunted by a ghost named George.  George was working on Norton auditorium as a construction worker.  He fell from the scaffolding and died, but his ghost lives on haunting students and visitors alike and adding his ghostly presence to the numerous phantoms that haunt the halls of UNA.

The Wesleyan Building is also said to be haunted by a civil war general's son who drown himself in a river not far away.   His ghost must have formed some attachment to the old building, because his footsteps can still be seen and heard walking the halls at night.   Additionally, the off campus bookstore is haunted by the ghost of a little girl who died of rabies. 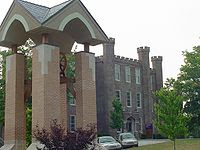 So if you like to be surrounded by ghosts, UNA is the place to go to school.
Email Post
Labels: Florence Alabama Ghosts Hauntings universities University of North Alabama

Sharon Day said…
When you consider the degree of depression amongst college students away from home and under the stresses of college, it's not surprising any college is haunted, but that one sounds like it's earned it. Perhaps they should call them "Haunted Halls" instead of "Hallowed."
February 1, 2010 at 8:19 PM