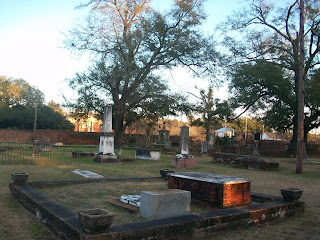 The Church Street Cemetery is tucked neatly away in the shadows of the lazy oaks of Mobile, Alabama.  The moss drips off the trees and brushes the ancient tomb stones. The graves here are old.  Some of them go back two hundred years or more.  During Mardi Gras,  the cemetery is almost festive and several of the tomb stones are covered in strange bright decorations.  Mardi Gras beads hang off some and  tiny plastic monkeys covered a grave that payed homage to someone who loved to throw a party.  The bright colors are a stark contrast to what should be a somber scene.   Everything seems a little out of place and visitors aren't sure whether to surrender to the sense that there are ghosts everywhere or crack open and beer and start to party.  Either option would be appropriate in this setting. 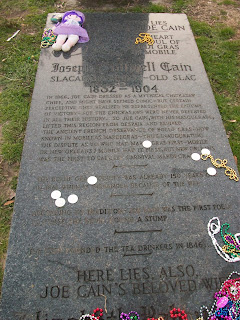 In fact,  this little cemetery is the starting point for the largest parades of Mardi Gras.  Buried in this cemetery is Joe Cain.   Joe Cain was a civil war veteran who fought for the South and is credited for the rebirth of Mardi Gras traditions that had been abandoned since the French left the Gulf.   Partly to awaken a depressed and defeated city and partly to spit in the faces of triumphant union soldiers,  on the first mardi gras following the civil war Joe dressed up as a Chicksaw Indian and paraded up and down Government Street.  He was joined by other revelers and a tradition was born in Mobile that would take hold of the city every year that followed.   In 1974,  Joe Cain's Merry Widows were formed as one of the most interesting Mardi Gras Societies.  Every Sunday, Joe Cain Day, before Fat Tuesday these widows dress in black and go to the Church Street Cemetery.   The parade starts from the cemetery and follows the women, dressed all in black, around the parade route drinking and hurling beads.   Even from the grave,  Joe Cain is the life of the party. 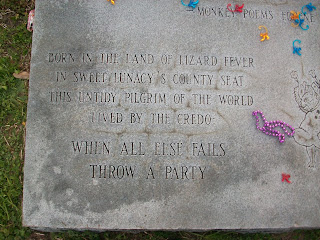 So you have to wonder if Joe Cain's ghost is anything to fear.  His ghost certainly wanders this cemetery waiting for the party to come to him again.   His presence and the presence of other ghosts can be felt as soon as you stepthrough gates of  the cemetery.   A cold chill travels up your spine and I wasn't sure whether to shutter or laugh.  My children ran through this cemetery with the EMF, which lit up like a Christmas tree.    I didn't catch anything on film here nor did anything come up on the voice recorder, but the ghosts were a real presence in this cemetery.  Haunted America even ranked this graveyard as one of the most haunted cemeteries in Alabama.   Yet despite the ghosts,  I still felt this was more of a happy place.  I felt that maybe the ghosts waiting here were waiting for the next party and that their only unfinished business might be the next Mardi Gras.
Email Post
Labels: cemetery Ghosts Joe Cain Mardi Gras

Sharon Day said…
Oh, I adore cemeteries and the traditions. Out here in the west, they are vastly different and the customs are soooo strange. That one looks like a fantastic resting spot. I'd want to linger myself--especially when festivities start.
February 24, 2010 at 3:10 PM

Jessica Penot said…
I don't think I've ever been to a cemetery in the west. I grew up in Utah but I don't remember the cemeteries. What makes them so different? I would love to see one.
February 24, 2010 at 9:13 PM

Sharon Day said…
Hey Jessica, I noticed TAPS is looking for teams in Alabama to add to their family.
http://www.the-atlantic-paranormal-society.com/

Western cemeteries are really different. Part of it is the look--no trees, barren, and often times rigged headstones by poor families that have taken the summer heat and fallen apart--lots of wood and concrete that didn't last over time. One thing that struck me the most at first was the Catholic population of Spanish descent. They often leave lots of decorations around the graves. They're often covered with fake flowers, glass boxes with little statuary in them to represent the person's interests, they leave outdoor chairs for when they visit, lanterns, windchimes, solar lights that glow at night, baby dolls, pieces of cake, bottles of wine and beer... They also have baby graves shaped like a metal crib around the grave and they leave stuffed animals and toys inside--it's heartbreaking. There's a huge amount of Woodsman of the West graves (I think that's what they're called) The headstones look like a chopped down tree. There's loads and loads of mason's graves too.
February 24, 2010 at 9:22 PM

Courtney Mroch said…
Oh WOW! How cool. I never would have EVER expected to see Mardi Gras like this...EXCELLENT PICS!
February 28, 2010 at 8:02 PM