Roosevelt Island is a narrow island in the East River of New York City.   The island, now filled with towering high rise housing complexes, was once largely secluded from the rest of the city.   Originally called Blackwell island, the island belonged to the Blackwell family for most of the 18th century and part of the 19th until it was bought by the state of New York as a location for charitable and corrective hospitals.

The first such institution established on the island was a prison which was the source of much scandal.  It was built in 1825.  The second institution established on the island was The New York Lunatic Asylum that was used from 1837-1894 whose buildings included the Octagon which still stands today.  Over 1700 patients were housed in this asylum, twice the suggested occupancy, and these patients were supervised by convicts from the neighboring prison.  Charles Dickens was one of the more famous people to have visited this asylum and he described it as horrible and "very painful."  A famous reporter, Nellie Bly, disguised herself as an inpatient and spent time in the asylum as well and she described the asylum a  "human rat trap."

In addition to the horrible assylum and prison that marred blackwell island, the island was also the site of a Smallbox Hospital, which housed small pox patients from 1856 until 1886.   The intense suffering that went on in this building added to it's ruined state have built numerous rumors about it's ghostly activity.  The ruined hospital is now known as the Renwick Ruin and is brightly lit at night giving it a ghostly glow that only adds to stories.

These two facilities are the tip of the iceberg when it comes to Blackwell, later turned Welfare, later turned Roosevelt Island's dark history, but these facilities ruins are the most notoriously haunted.    The Octagon has been renovated and turned into an apartment building. The residents of the building have reported numerous unexplainable incidents.  Ghost hunters have taken pictures of ghosts lurking in the hallways of this building and even the pets refuse to walk up the stairs of this once "human rat-trap"

I was lucky enough to visit my aunt on this island last year.  She lives in one the large high rises that have consumed the once forlorn landscape of this island.  She reports that she felt ill at ease when she visited the octagon and that it's atmosphere conveyed a sense of old sorrow.  It is easy to forget, however, that the island was once filled with such mass suffering and sorrow.   The island's atmosphere has been completely changed, but the ruins of the old hospital remain, reminding visitors that it wasn't so long ago that the island belonged to the tortured souls of the dying, the mad, the forgotten, and the imprisoned.  To learn more about Roosevelt Island please visit:   http://nyc10044.com/timeln/timeline.html 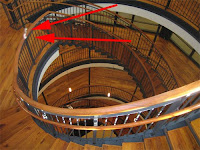 Sharon Day said…
Oh boy! I'm so glad you wrote about this one! I've been intrigued by that island ever since I first caught a glimpse of it. I wondered what it was. Later, I looked it up and learned more about it and was fascinated. It seemed hard to believe it sat there in NY and was not being utilized. I think it's possible to renovate and make it better, especially a site surrounded by water. It's as if it constantly keeps things changing. Great post!
January 12, 2010 at 7:29 PM

Kitchen Benchtops said…
Roosevelt Island and have always wanted to go visit and shoot some video like scenes from spiderman.
January 27, 2012 at 6:13 AM