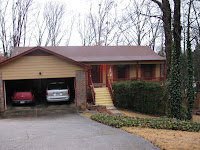 The word poltergeist is from the German and means "noisy ghost."  However, experts today agree that a poltergeist is not a ghost.  A poltergeist is the product of the psychic energy.  This energy has usually been found to be connected with  angsty, pubescent teenagers.  The most common manifestation of this energy is the movement of physical objects.   It is easy to see why poltergeists were mistaken for ghosts.   In homes that have poltergeists, objects move on their own and strange noises fill the house.   It is important to remember, however, in the case of poltergeists this activity ceases when the angst or the person associated with the angst leaves the house.

The house where I grew up was the perfect place for poltergeist energy to flourish, as it was often filled with pouty, angsty, adolescent girls.  I am not always the most observant or communicative member of my family, so much of the activity in my house went over my head or was purposely ignored because I didn't believe in the supernatural.   I know when I hit puberty I was plagued by bad dreams and feelings that something was hovering over me, watching me.  Being a logical young woman,  I assumed it was hormones and did my best to ignore the noises and oddnesses that followed me.   After speaking with my mother tonight,  I realized it may have been more than hormones.  She also said that for the years during my adolescence she felt like something evil had entered the house.  She heard noises at night and felt like something was sitting on her chest, crushing her.  She was always afraid.  She felt this dread so powerfully that she called two different priests to the house to do services and the darkness left.

My sister came of age later on and was similarly angsty.  With her however,  objects moved of their own accord.  Boxes stacked against one wall would fly across the room.  Chairs would relocate and loud noises would fill the house at night.  This activity stopped on it's own and was not accompanied by any sense of dread or malevolence.

I decided to do my own childhood homestead as a haunted location for this blog after talking to my parents about all the moving objects and noises that had filled the house during my sister's late childhood.  I had no idea about the other activity and the more my parents talked the less sure I became that I knew whether there had been a ghost, a poltergeist, or a bad spirit in the house.  I'm still not sure.  But there certainly was enough activity in the house for enough years for me to call it a haunted location.  The picture below is the sticker one of the priests placed on the doors of the house following a blessing that was done.  Any thoughts out there?  What was in my parents house? 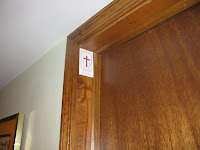