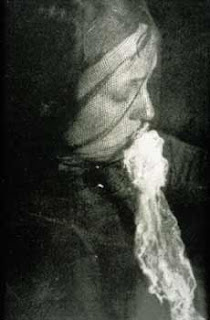 The history of the exploration of the paranormal is filled with con men and liars.  Although, I love the paranormal, I often get exhausted by the sheer volume of obviously fraudulent videos on youtube and false stories that litter the internet. I get a fun amount of exposure to them by my son who thinks everything on youtube is true.  These stories are only made bearable by the fact that most of them are so ridiculous they make me laugh.   Of course, this is nothing new.  All you have to do is turn back the clock to the last century to see how really revolting people can get in their attempts to sell the paranormal.

During the time contemporary to and following World War I there was and explosion in what was then called spiritualism or mental ism.  Spiritualism  is a religious movement revolving around communicating with the dead via a medium.  This explosion was brought on by the massive number of people that died in the war and of the Spanish Flu.  This was a dark time and death lingered around every corner.  One of the more bizarre activities that became prevalent in this movement was the explosion of ectoplasm.   Anyone who has seen Ghostbusters has an idea what ectoplasm is.  Ectoplasm is a term used to define a physical manifestation of the supernatural and  it usually came out of the medium's nose, mouth, or ears.  The term, defined by Charles Richet, meant spiritual energy externalized by psychics.  It was for many years, used as absolute confirmation that the supernatural was tangible and provable.

Ectoplasm was so believed in that it was featured in respectable scientific journals and it's existence was confirmed by the great minds of the time including William Butler Yeats and Sir Arthur Conan Doyle.  It was so believed in that Scientific America sought to do a study on it and offered a $5,000 reward to anyone who could demonstrate the release of ectoplasm in front of a scientific panel.  This reward lead to the beginning of the end of the scientific validity of ectoplasm.

What was discovered was both revolting and eye opening.   Although many techniques and materials have been used by mediums to produce ectoplasm, the medium examined by this panel was found to be storing a sheep gut and fat mixture in a sack in her vagina which she ex pulsed at the appropriate time to make it appear as if she was expelling ectoplasm.  Further research into other psychics revealed many other grotesque techniques for producing this fraudulent material.  Some women learned how to regurgitate on demand and swallowed yards of muslin and cheese cloth which they would vomit on command.  Others stored materials in their rectum.

Learning this delightful history of ectoplasm changed Ghostbusters forever.  I thought that ectoplasm was some kind of ghost residue but now that I know it is sheep gut forced out of some ladies vagina or rectum I really can't watch Ghostbusters without feeling a little ill.
Email Post

Sharon Day said…
I'm thrilled you did this post! It's a subject I've always wanted someone to approach. One of my biggest gripes has been the turn-of-the-century spiritualists movement in terms of ghosts and the people who today still use it in ghost hunting. It's as close to snake oil as possible. I know people who still think ectoplasm and old early 20th century ghost photos are real. It does say a lot about the general problem in the world of ghost hunting with believers who take it on as a spiritual and religious form and those who seek to find the truth--even if it's not in the spiritual realm. Wonderful post. I'm so glad you have this blog!
January 15, 2010 at 8:04 PM