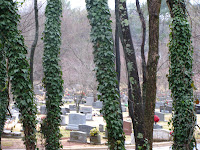 Local legend has it that Huntsville suffered a rash of child abductions in the 1960’s, and the bodies of the children were found in the area of the playground. Since that time, there have been reports of swings moving on their own, children calling out, giggling, and when photos are taken, orbs of light believed to be the spirits of the children are captured. Much of this phenomenon occurs between 10 p.m. and 3 a.m., far too late for any live child to be out playing. 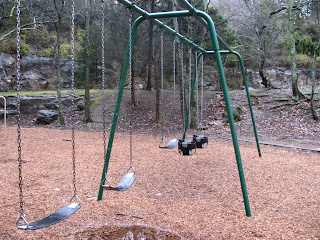 Local teens and other curious locals, often make pilgrimages to the playground at night to witness this activity. I have made this trip on several occasions, and although I have never seen any ghosts myself, I have heard many reports of swings moving on their own and bright lights drifting through the darkness.   I recently went to the playground with my family during the day to explore the playground and it is odd that the swings are always moving at this playground.  I can't say for sure that they aren't being moved by the wind or that there isn't some natural force at work, but a video I took shows the swings moving as my children play in the distance.  We didn't touch the swings that day because there were very large puddles beneath them, yet they still seemed to move.
Email Post

Sharon Day said…
That has to be one of the most chilling haunted stories. Something about young children still playing through eternity...never going home, never leaving their beloved swingset...(shivers)
That was a great post. Thanks for sharing that. Local legends are so effectively creepy and often times based in real events.
January 18, 2010 at 6:08 PM

Jessica Penot said…
I had some great video footage of the swings moving by themselves, but my son was running behind me telling the ghosts to come chase him and it was almost too creepy. I had to stop filming.
January 18, 2010 at 8:24 PM

seamusMoon said…
Somebody made a movie about it:

Anonymous said…
Back in 2008 i was living in Huntsville, AL and i was with my friends.I had heard so much of this place,and just had to go check it out.Well when we got there it was getting dark so we began to get our cams ready to take pictures of what ever happens.Around 12 we started to hear laughing and running around.I then heard like a little girl laugh so i took a picture as fast as i could and got a picture of what looks like a little girl bent over.
January 16, 2013 at 8:11 PM

s_g_simms said…
I was actually there just last night. My friend sat in a swing, and something touched her back as if to say "don't get on my swing",
Another group was there, and they had taken pictures and there were definitely mists and orbs in the photos on their phones.

It is definitely something to check out if you are into the paranormal, and ever get a chance to go.

Anonymous said…
Where is the mine? The killer lived in the mine. If we could look in the mine we could find things out. There is a trail but it leads to a dead end.
March 27, 2014 at 1:17 PM

Anonymous said…
My 12 year old daughter is a medium and extremely gifted she can see hear feel and touch spirets ghost angels and demons with her it doesn't have to be dark for her to see them I myself also sense them and see them my son can see hear and sense them and my youngest reads auras and reads past lives I would love to take my children there to see if there is any truth to these tales regardless true or false it's a great story but it's sad because the little kids are traped and are not moving on
August 17, 2015 at 3:08 PM

Unknown said…
I used to go to the playground on a regular basis. And I never saw anything for the longest time. But years later one day in about 2007, I was hanging out with a guy who was from out of state, and he wanted to go somewhere cool so I decided that we were going to go to DCP. And it was around 6 in the evening when we got there and all was normal and there were a few people there but not many. So we decided to stay there until it got dark just to see what would happen. And nothing weird happened the whole time we were there except for the anticipation of whether or not something was going to happen. But, when we decided it was time to leave things took quite a different turn. We had walked across town to get to DCP, and so the quickest way to get back to where we came from was to walk back through the cemetery to California Street and then the rest of the way back through downtown. So we begin our journey back and you know there's just something about walking through a cemetery after it's dark that causes you to constantly look behind you just to see if anybody is following you or if maybe you'll get lucky and catch a glimpse of something weird that you wouldn't have seen otherwise. And for the first 30 or 40 yards that we walked back down the path through the cemetery all was well, but then as we begin to get far enough back into the cemetery to not really be able to see the end that we just came from it started to look like there was something following us in the distance. Now as much as I love ghosts and horror and ghost stories and all that I've always still been skeptical as to whether or not you know that could actually be real. Well as we begin to go further we started to walk a little faster because let's be honest nobody really actually wants to hang out in the cemetery after dark especially not a huge Cemetery where no one can see you from the road. And at first when I thought something was following us I had decided it's probably an animal or something you know maybe somebody's dog is running around or whatever. But then the further we went the better we started to be able to make out the fact that it was tall enough to not be mistaken for an animal any longer. And then we started to get a little paranoid so we begin to walk briskly. And wouldn't you know it begin to move a little quicker behind us and by this point we could actually see that it was some type of dark looking figure that was maybe about 2 and 1/2 to 3 ft tall and it appeared to be wearing some kind of hood. And that is all we needed to know to haul ass add through that Cemetery and let me tell you we could not make it back across that wall fast enough. And then as soon as we got on the other side of the wall our whole Persona changed from being terrified to it seeming like everything was okay and when we looked back nothing was following us, there was nothing there at all. Now I know that lots of skeptical people would like to say oh you were just in that state of mind and you let your mind play tricks on you. But I refuse to believe that to fully grown men both imagined the same thing at the same time.
November 6, 2017 at 10:30 PM

Autobug2 said…
Have the supposed 'deaths' of children back in the 1960's ever been confirmed? Have newspaper articles run from that time to prove such a crime occured? And supposedly the killed who abducted the children lived in a cave? A cave where? Was he ever caught, or is this just background BS that sounds 'spooky'? I'd like to know the truth.
October 3, 2018 at 9:52 AM