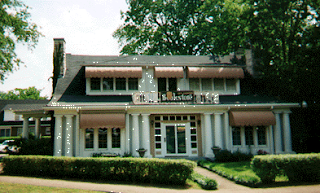 The University of North Alabama in Florence has several ghost stories associated with it.  It's old halls are littered with ghosts and phantoms.  One of my favorite ghost stories from this University comes from the off campus bookstore.  This bookstore wasn't always a bookstore.  It was once a house and a family lived there.

It was a typical family.  There was a mother, a father, and a little girl.  They were a happy family, but the little girl was lonely. She spent her days playing alone in her room with her dolls.   The little girl's father was particularly worried about his baby's loneliness, so he went out and purchased an adorable, little puppy for her.  Of course, the girl was delighted.  It was love at first site.  She loved the puppy so much she put it in bed with her that night and the two little ones nestled up next to each other in the soft, evening light.

Time went on and the building was turned into a Fraternity House.  The house was remodeled and the fraternity members reported seeing a phantom girl sitting in the second story window gazing out.  It wasn't just the frat boys that saw her.  People walking by the house reported seeing her as well.   The building is an off campus bookstore now and people still see the little girl looking longingly out the window.  The women that work at the bookstore don't deny her presence.  They say she still makes her appearances, sometimes alone and sometimes with her dog.
Email Post
Labels: Florence Alabama ghost hunting Ghost story Hauntings University of North Alabama

Anonymous said…
Wow it's just like the buy viagra store house in the center of downtown the guard said he heared weird voices on night and many of them have quit the job.
January 13, 2011 at 12:38 PM

Anonymous said…
I was a student from the fall of 1988 to Spring 1994 and I would often buy my books at this bookstore across from Rogers'Hall. One day while I was there a beautiful little girl came up to me and asked me if I had seen her dog. She was dressed in a petticoat and she had beautiful long hair. I turned my head for a split second because I was trying to find her mother and she was gone. She was not there. I did not think anything about it until several years later when I went on a ghost tour and I heard the story. It hit me that a little girl did come up to me and asked me if I had seen her little dog. At the time people were going to the photo studio that was just a few doors down and would have their children wear Victorian clothing so when I originally saw the little girl, I never thought anything about it but when I heard the story I began to realized that I may have had a ghostly encounter with this little girl. If I did, she was kind and she eluded a feeling of sadness. I knew something was wrong at that time about her but I past it off. To this day I still doubt myself if this really happened to me but I still go hmmmm. I wish I could have that happen to me again so this time I could be more help to her tell her where her dog is and maybe give her peace. However, I really cannot discount that maybe I never saw her at all and my mind incorporated into memory when I went on the ghost tour. I wonder if the mind could play such a trick when at the time I remembered it so vividly.
April 9, 2017 at 3:47 PM