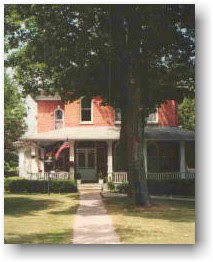 The first ghost story to grace these pages is one of my own. It is the story of my family house, which has haunted my dreams with it's many ghostly encounters since my early childhood. This first story came from my parents who have spent many long nights in the gold room of the 150 year old house my family has always lived in. My father does not believe in ghosts.

The Allaire-Newton house has been in the same family since it was built. It is a beautiful and stately 8 bedroom home in the small town of Cheboygan, Michigan. Many people have lived and died in this beautiful home. The week my parents went to visit my grandmother the house was filled with family. It was late at night in Northern Michigan. In the North, it gets so cold you can usually hear the walls groaning at night, so the occasional moaning of floor boards and creaking noise doesn't ever bother anyone. This is doubly true of old houses that make constant noise. The family has always ignored these usual noises. This is why it was particularly odd when my father was woken up in the middle of the night by a very loud banging at the window. He and my mother got up to examine the window. There were no trees by the window. It was not windy. There was no way to explain the increasingly loud and resonant banging that filled the cold, gold room.

My parents, being reasonable adults, tried to shrug off the noise and return to bed, but the noise remained, making it impossible for them to sleep. My father then got my uncle from the neighboring room to help him find the noise so they could sleep. Although he heard the noise, neither men could find any explanation for the noise that had become ceaseless. In the morning, the noise went away.

My mother attempted to take a nap that afternoon. She crawled into bed and turned off the light. It wasn't long before she felt someone crawl into bed with her and take her hand. She smiled and held the hand of what she thought was my father, but when she rolled over to kiss him she found the bed empty. That night they switched rooms with my aunt and uncle and the noise returned, louder and angrier than ever. In desperation, my aunt and uncle fled to the colder, smaller room at the other end of the house, unable to bare the noise any longer.

This was not the first time things like this happened in this house and not the last. Every member of the family has a story.
Email Post